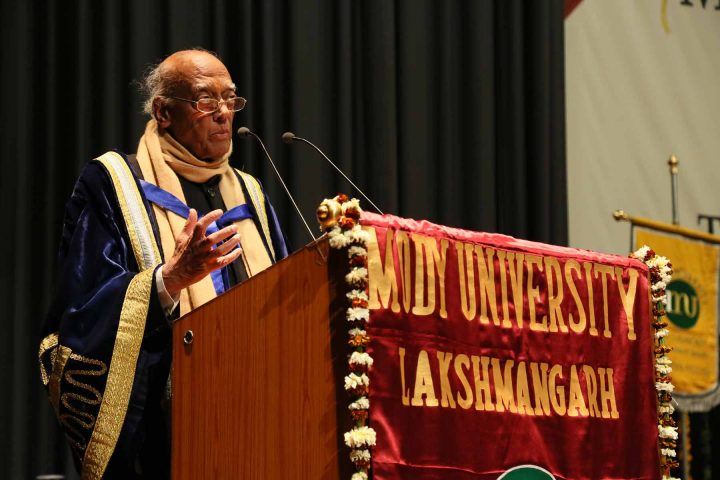 Spread across five days, FDC witnessed 20 gala events including a Bollywood night, Bhajan Sandhya and the much awaited KaviSammelan. The FDC programme, which was held from 22nd January to 26th January, at the Swami Haridas auditorium of the University campus was hosted by various departments of the University, including College of Engineering and Technology (CET), College of Business Management, Economics and Commerce (COBMEC), College of Architecture and Design(CAD), College of Arts Science and Humanities (CASH), College of Law and Governance(CLG), College of Fashion Designing & Merchandising (CFDM) and Mody School as well.

The highlight of the FDC was the Twelfth Convocation of Mody University. In the convocation, a total of 604 girls were awarded degrees, out of which 436 graduates, 156 post graduates and 12 Ph.D. students were felicitated. Mody University also awarded and honoured distinguished alumni and outstanding students. Mr. Chauhan, lauding the efforts of founder and Chairperson of the University, Rajendra Prasad Mody, said that Mr. Mody’s contribution to the society, and especially to Rajasthan, has been immense and he is really happy to see the dedication and efforts made by Mr.Mody in setting up the University. Appreciating the convocation further, Mr. Chauhan said that it is by far the best and most disciplined convocation he has been to so far.

As a part of the on-going rituals, Laxmi Narayan Yaga was performed on all the five days. Philosophical discourse on Value system and Vedantaimparted knowledge about Indian society and its values and teaching of the Vedas.

On the first day of the event, Mr.Thakralinaugurating the exhibition of Mody School applauded the efforts shown by the girls of Mody School. In the evening, short plays NanhiKa Belt and Kabadi Wala were performed by the students of Mody. While Nanhika Belt talked about theimportance of a car-seat belt, Kabaddi Wala depicted the life of a garbage collector and his hopes and aspirations to give a better life to his daughter.

The events also saw performances of renowned artists from across India mesmerizing the audience. Pune baseddance troop, Miland Oak and his crew enthralled the audience with their power packed performance. The troop depicted the journey of 100 years of Bollywoodthrough a musical play.KaviSammelan which was organized on the fourth day saw some well-known faces performing during the event. Renowned poets like Ashish Anaal, Arun Gemini, Ved Prakash, Deepak Gupta entranced the audience with their recitations.
The fifth and the final day ended with Republic Day celebrations by the students of Mody University and Mody School. The girls sang and danced to patriotic songs and also displayed their skills like horse riding, gymnastics, flute and drum performances which they learnt during their stay in the campus.