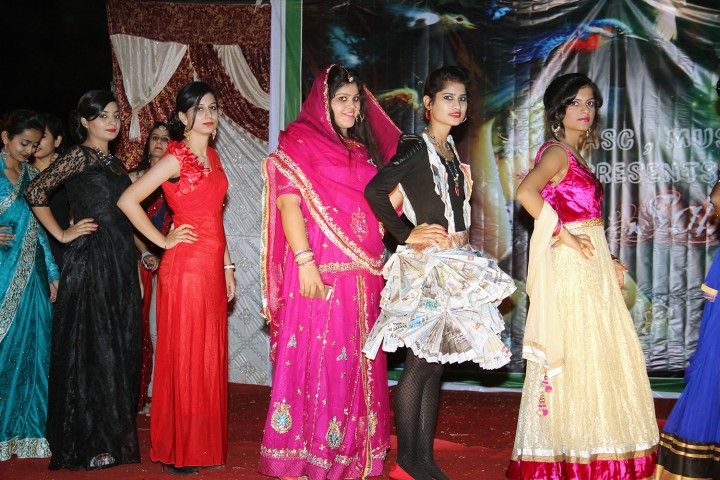 Cultural functions and festivals of a university showcase the true emblem of the talent and the latent non-academic qualities of that university.  Diversity in the forms of three basic forms of music namely dancing, singing, and playing musical instruments and ever evolving forms of representation of human emotions such as drama, theatre pantomime and street theatres portray the cultural strength of the university.Mody University always believes in providing appropriate platform to its students so that they can exhibit their diversified talent.  With the blend of all these diverse cultural manifestations Cultural festival-Solitaire -2014 was inaugurated by lighting of the lamp before the goddess of knowledge and muse Devi Saraswati by Dean FASC Prof. Sunil Jakhoria, which was followed by a devotional welcome dance of Lord Ganesha. Face painting competition witnessed the creativity, innovation and different shades of emotions by the students on the canvas of human face. Antakshari competition brought out the singing qualities of the students on the floor and it totally conquered the heart of the audience and judges alike. Movement of the feet on the reverberating tunes of music is the commonest form to express the varied emotions known to the race of homosapiens and it was the biggest show of the Solitaire -2014 which attracted most number of the participants and audience.  And the audience never missed on any opportunity to grab the jovial mood of the dance competition.Solitaire Got Talent was the talent hunt event looking out for the most talented girl on the campus. To prove their mettle and creativity, students portrayed different shows which brought giggles and cackles on the faces of audience and won them the laurels. Through the Paradigm Parade students displayed their modeling skills with the amalgamation of grace, grandeur and elegance through their gate and wisdom. Culinary and gastronomical knowledge and tastes of the students were also displayed on the different stalls in the form of Indian and continental delicacies prepared by the students themselves. Stalls offering opportunity to participate in some games which were testing the skill and luck factor of the participants in equal fashion. A part of the earning by these Taste-Stalls will be donated for a noble cause in offering a helping hand to a Jaipur based NGO-Gramiksha which helps the poor children in their educationand creates  awareness among poor children about sports, cleanliness and conservation of environment. Effort of the students shows the soft corner of our students who always march ahead in such philanthropic endeavors. At the end of the cultural extravaganza Dean FASC Prof. Sunil Jakhoria was boundless in encouraging students and thanking everyone related to the festival. The Solitaire-2014 which was organized in collaboration of Gunjan, Vidushi and Pratispardha Societies respectively cultural, academic and sports societies of Faculty of Arts, Science and Commerce, came to a successful end with a token of thanks and gratitude by the secretary of Gunjan Society -SayeshaLakhina.