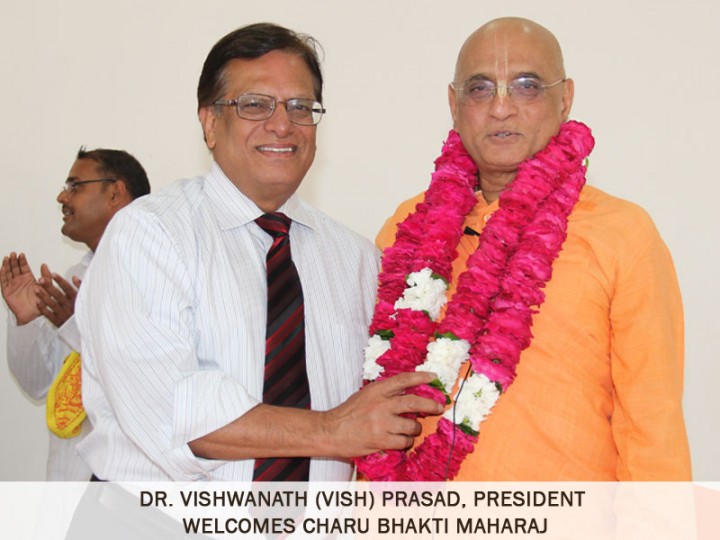 Religious leader of ISKCON (International Society for Krishna Consciousness) delivered a lecture on the teachings of the Bhāgavata Purāṇa in the Sadhana Kendra (Meditation Hall) on 09th October 2014. Addressing the gathering he pointed out, there is nothing outside the Paramatman. The whole world is His glory. Due to ignorance people look upon God as this Universe of apparent variety. In fact, the whole world is consciousness. Through ignorance, one looks upon it as a conglomeration of objects. God, in fact, never becomes an object. The mountains, the oceans, etc., are appearances of consciousness. The Karmas of Jivas create a multiplicity where it is not. When there is one being present in everyone, questions like, ‘Who are you?’, and answers like, ‘I am so and so’, convey no meaning. That someone is a king, that he has a large following, that there is such a thing as kingship and there are other things outside him are all based on imagination alone. The truth is that there is the Atman. The Universe is an undivided existence of the Supreme Self.
Swamiji was welcomed by President of Mody University Dr. Vishwanath (Vish ) Prasad. A melodious harinam kirtan was performed after the talk by the ISKCON kirtan mandali from Ujjain. His Holiness had a round of the entire University campus and furnished the Tapovan Visitors’ Book with his pious comments.