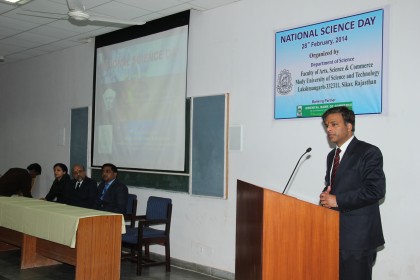 Science, the root of all development and sophistication, was honored and given a new dimension by the Faculty of Arts, Science and Commerce of Mody University of Science and Technology on February 28, 2014 by celebrating the ‘National Science Day’ to commemorate the work of Physicist and Noble Laureate Sir CV Raman.

The major landmarks of this event were guest lectures on Physics and Biology followed by Poster and Quiz competitions.

Eminent personalities from the field of Science and Technology were invited as chief guests to add more colour and knowledge to the event.

In his opening speech Dean-Prof (Dr.) Sunil Jakhoria said that the ‘National Science Day’ is celebrated to commemorate and honor the work of eminent Physicist Sir C.V. Raman and to mark his outstanding contribution in the invention of Molecular Diffraction of Light.

Through his speech he motivated the students to make the correct career choice in the field of Science. He highlighted the National theme of this year as ‘Fostering Scientific Temper’ and emphasized that India can lead the world  and become a great power only by improving the quality of its research work in science and  by taking inspirations from such great personalities.

An audio-visual presentation on the life and achievements of Sir CV RAMAN was presented by the students during the event to pay the legendary laureate a lifetime tribute.

In his scientific commentary, Professor A. K. Nagawat, emphasized on the value of science in our daily lives.  He believes that science governs society and society can only be changed by means of technology. “Tremendous development in science and technology can globalize the world”, he added.  Making the event more interesting to the students, he also talked about developments in physical sciences as well as inventions and progressive developments in Nano Science like Quantum Dots.and etc.

Dr. Vidya Patni who is the President of Indian Science Congress Association-Jaipur Rajasthan, talked about research in the area of Biotechnology. In her speech, she highlighted on the ideas of plant biotechnology which emphasized on the Nano Technology and also ideated about the scope of Biosciences.

Apart from such inspiring speeches by eminent scientific personalities, Poster presentations and Quiz Competitions based on scientific culture and ideas were held to make the event more fun and exiciting.

The students of FASC participated whole-heartedly in the competition and prizes were distributed to boost their motivation and confidence. The first prize was won by Ms. Nisha and Ms. Saloni , and the second prize by Ms. Chitransha, Ms. Harshita and Ms. Prateeksha.

Organizing secretaries for this event were Dr. K. P. Sharma and Mr. Navneet Joshi. The concluding remarks and Vote of Thanks were proposed by Dr. Narendra Kumar, Convener & Head, Department of Science, and FASC-MUST.

This event was definitely an eye-opener for the students as well as the faculty of FASC in raising their knowledge and idea on concepts of science and technology.