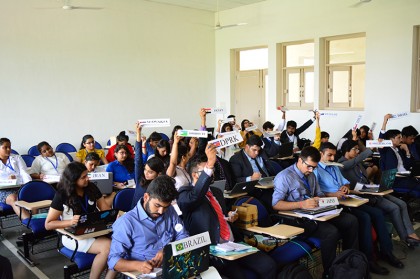 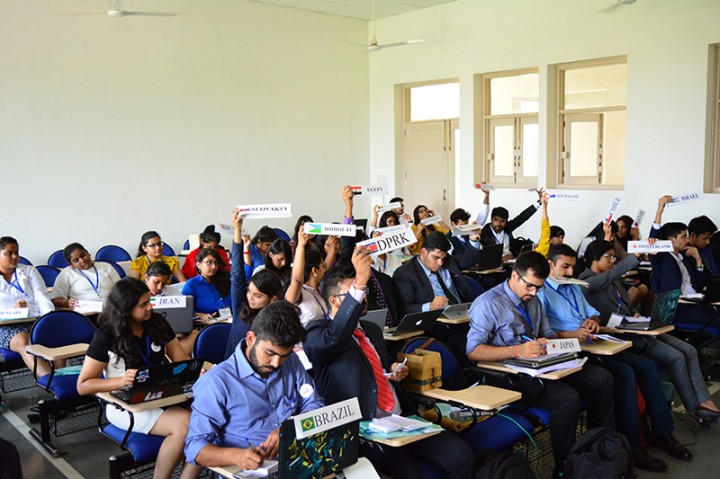 Rhetorica, the echo of the name itself manifests a superlative degree of sage words. Amidststrewn streamers and loud cheers, the three day literary fest of CET, Mody University, Lakshmangarh commenced on 2nd September 2016. The fest was started by thelamp lightening by Prof. (Dr.) Suresh Advani, President of Mody University and Prof. (Dr.) V. K. Jain, the Dean of CET. Rhetorica, the mecca of literature lovers is packed with snappy surprises and Duchene smiles. The cauldron is brimmed with quizzes and spell bees, to which we added dollops of debates and elocutions and sprinkled it with extempore and story writing. We seasoned the dish with JAM and poetry writing.

Adding cherries to the cake, we had talk sessions with two luminaries-the charming SanahRizwi and the veteran Shraddha Bakshi on 3rd of September. In addition, the talk of the town was of course, the MUN Conference. Rhetorica Model United Nations 2016, the third edition of Rhetorica MUN, was held at Mody University, Laxmangarh, Sikar on 3-4 September 2016.  The delegates were all decked up in formal suits and ties, flaunting their skills, diplomacy and suaveness. The event featured four committees namely the UN Security Council, the International Atomic Energy Agency, the African Union and the Lok Sabha. The topics on the table for discussion were: Establishment of a framework which aims for combating poverty and terrorism in the continent for African Union; drafting an action plan on nuclear safety forInternational Atomic Energy Agency; reviewing Armed Forces Special Power Act for Lok Sabha and measures to curb revenue generation by extremist group for UN Security Council. From novices to mavericks, we had an eclectic mix of flavors who believed that nothing is more powerful than carefully directed sentences.

The aforesaid committees witnessed two days of heated debate on their respective agendas and also formed their resolutions by the end of the day. The executive board interacted with the delegates and successfully moderated the debate. In addition to that, the event also received adequate coverage by the members of the International Press, an in-house media. The event has a brilliant ideology behind this conference as it prepares the youth to be a part of national and international policy making in the future. And undeniably, they came. They Spoke. They conquered.

The event witnessed around 150 participants from colleges nationally. The enthusiastic students and the veteran executive board members processed the idea of the youth into a discussion for two days, which consequentially formed policies to solve various national and international issues.

The evening concluded with a closing ceremony where the Secretary General addressed the august gathering with a thank you speech, paving way for the next edition of Rhetorica.