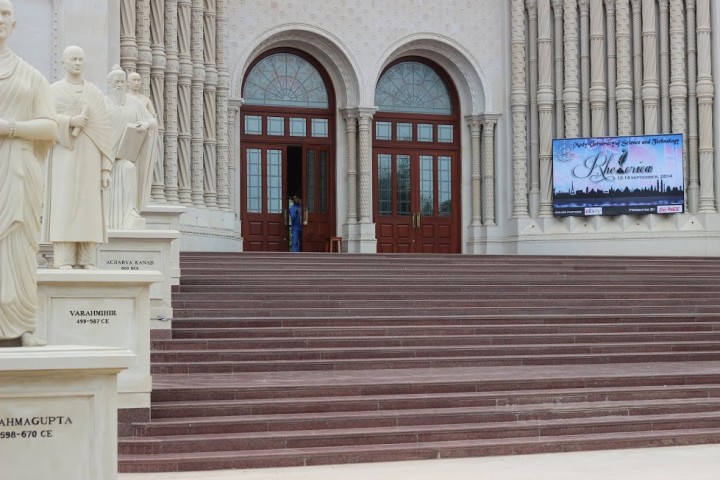 12th September 2014, the day we had all been waiting for since the past 5 months finally arrived. The dawn of Rhetorica 2014, the most awaited moment in the fall Semester of 2014 rolled in with excitement happiness, pride and little anxiety. There was celebratory mood all around and all the OC members and the Secretariat was busy making arrangements for the opening ceremony. At 2.30 pm the opening ceremony started with lighting a Diya symbolizing the ignition of Flame Rhetorica. A lot of faculties from different departments were present for the ceremony. President Dr. Vishwanath (Vish) Prasad congratulated the students for their initiative in bringing in Rhetorica to Mody University campus and inspired the students to learn, be creative and apply analytical, critical and creative thinking throughout their life rather than following conventional study patterns. To prove his points, he walked the students through from Vedic times to current educational patterns in India and USA. He also urged students to carry forward the torch of Rhetorica every year. We could clearly see that his speech motivated and inspired our students as it was received with a huge round of applause. After his speech Dr .Desai, Dean FET, Dr. Jha, Associate Dean (FET) and Dr. Amit Mukherjee (mentor) spoke to inspire and congratulate students for their great initiative and hard work. Secretary General of Rhetorica, Ms.Shubhi Mathur shared thoughts on her journey bringing in Rhetorica, 2014. Atmosphere was electric as all the volunteers and organizers were busy in the preparation of upcoming events. After the inauguration ceremony, everyone was served refreshments. After the tea break it was time for The Great Debate! About 36 students who participated were given unique topics ranging from India’s ability to host Olympics, to Love Jihad to current socio-cultural changes and changing mindsets of young India.
Mrs. Charu Prasad, PRO Mody University and Mrs. Uma Joshi, Faculty FMS were our judges for the first round. It was a session full of enthusiasm, heavy debating and rebuttals. Half of the participants qualified for the next round and everyone was given eBay coupons as a token of appreciation! While all this was happening inside the FET building, the students at the help desk were on their toes registering participants coming from other colleges.

The activities of Day 2 began at 9:00 AM in the morning. The first event of the day was round 2 of THE GREAT DEBATE. This round was judged by Mr. Anansh Prasad, who was also the chair to one of our committees. The qualified participants came back with renewed enthusiasm, which was pretty evident in their manner of debating. The round lasted for a couple of hours. While this was happening in room no. 32, the delegates from various colleges were gathering in the halls of FET. After the debate, all the delegates from our college and other colleges gathered in room no. 1 to be addressed by the Secretary General. The response was humongous. With over 50 participants from outside colleges and over 60 from our own the committees began at their scheduled time i.e. 11:30.
Both our committees UNODC and ICESR began parallely. UNODC was chaired by Mr. Anansh Prasad and Ms. Anshita while ICESR was chaired by Mr. Harshad Rane and Mr. Neel Dutta Roy. The committee broke at 1:30 for lunch and resumed the session in 30 minutes. The session went in full swing with debates and discussions on sensitive topics and heavy chit passing. At 3:30 the committee again broke for the interactive session with Mr. Kunal Majumdar, Chief-Editor, The Times of India Rajasthan. It was a question answer round moderated by our Secretary General Ms. Shubhi Mathur. Room no. 1 was brimming with students and faculties of all the departments as well as the committee members.
Along with this we also had the first round of Creative Writing Competition, Williams Words.

At 6:30, both the committees ended for the day with an entertainment section which was organized by the IP. At 8:00 all the delegates, OC members and Secretariat along with a few faculty members left for Desert Inn for formal dinner which was thoroughly enjoyed by all.

The final day of the fest. We had round 3 of THE GREAT DEBATE. After 3 days of heavy debating we got our winners. On the third position we had Sai Titiksha Golakoti from Amity Law School, second position was secured by Rishbha from MUST and the first position was bagged by Neelesh Kumar from Amity Law School. All the winners were given certificates and eBay vouchers. Side by side we had a JAM (Just a Minute) session which was hosted by Harshad Rane. At 10:30 the committees resumed for day 2. The first half saw heavy discussion and the second half was fun filled. The committees drafted their resolutions. After another entertainment session the committees were finally suspended.
The most awaited part of the MUN sessions was up next! The Prize Distribution Ceremony! All the delegates were given their participation certificates and the best delegates were given certificates and eBay vouchers. Delegates were also awarded High Commendation for outstanding performance in their respective committees. All the winners were beaming with happiness.

With this our very first literary fest, RHETORICA came to an end! The hard work of all the members paid off. The delegates went off with new friends and more knowledge. The OC members have already started working for the next fest. Hope to see you soon with new committees and new events soon. Till then Adios Fellas!