Nothing can be more glorious than proud achievement of our students, who not only make us proud but also become the guiding force for the upcoming batches. It is matter of great pride for Mody University that its students have been selected as Judicial Officers (Magistrates/Civil Judges) not in the State of Rajasthan but also in the States of Delhi, U.P. and M.P.

Ms. Shruti Jain, an alumna 2012-17 batch pass out was selected as judicial officer both in U.P. State and M.P. State Judicial examinations. She secured 5th position in M.P. Judicial Services examination, 2019. She will be joining as Civil Judge/Judicial Magistrate, M.P.

Another 4 of our alumnae have been selected as Magistrates (Judicial Officers- R.J.S.) . One of them has secured 12th (position out of 197 selected candidates).

Awarded for Contribution in Physiotherapy 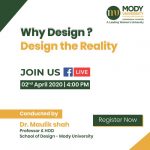 […] December, 2014 to spread awareness about AIDS and its harm to the humanity at large. Visit here- news.modyuniversi… for more informati...

MNIT sports meet is much less competitive. Even CBSE or Rajasthan Board sports meets are far superior. So what's the fuss ?