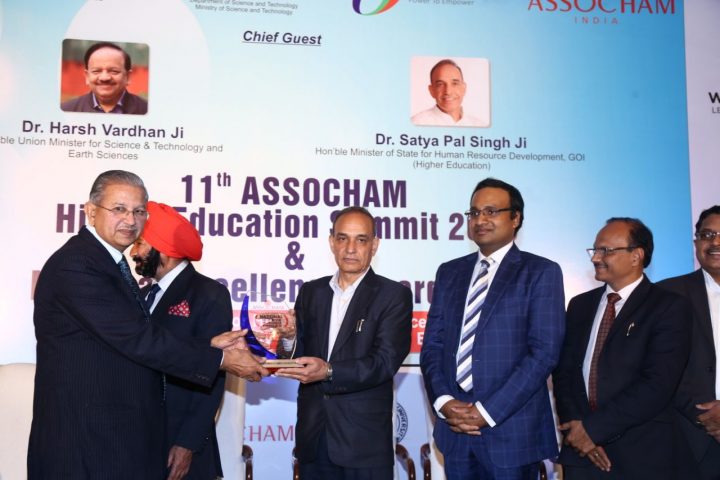 It’s hat-trick for Mody University as the university was awarded for the third time within one week. The all-women’s university was honored as the “Best Women’s University in India” at 11th ASSOCHAM Higher Education Summit 2018 in New Delhi. The award was accepted by Professor (Dr.) Satish C Shastri, Dean, College of Law and Governance and was presented by Dr. Sayta Pal Singh, Minister of State (MoS), Human Resource Development. This is not the first time, the efforts of Mody University was recognized by ASSOCHAM. Last year, the chamber awarded Mody University of Science and Technology (MUST) as the “Progressive Women’s University 2017”, at National Education Excellence Award 2017, for its contribution of education to women.

Talking about the honour, Dr.Manoj Madan, President-designate, Mody University said, “Mody University has always believed in women’s empowerment and it is committed in nurturing excellence in women for more than two decades. We are happy tobe awarded as India’s best women’s University of 2018.”

Mody University, time as again, has been recognized for its exemplary efforts and commitment it has shown to empower women. Last year, MUST was awarded as the Best Education Brand 2017 by India’s leading media group, Economic Times. In the same year, Competition Success Review (CSR) has awarded College of Engineering & Technology (CET) as the “Outstanding Engineering College of Excellence”. Mody University’s College of Business Management, Economics and Commerce (COBMEC) has been placed within the top 50 best business schools by Career360 magazine in 2017.