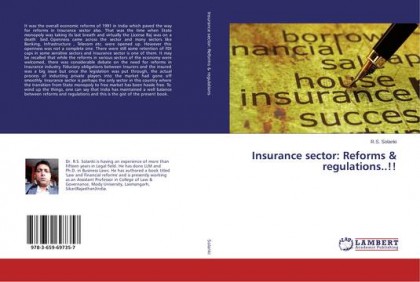 Dr. R.S. Solanki, Assistant Professor in Faculty of Law has got his second book published, titled “Insurance Sector: Reforms & regulations” ’ from an International publishing house in Germany. The work encompasses the overall economic reforms of 1991 in India which paved the way for reforms in Insurance sector also. That was the time when State monopoly was taking its last breath and virtually the License Raj was on a death bed. Openness came across the sector and many sectors like Banking, Infrastructure, and Telecom etc. were opened up. However this openness was not a complete one. There were still some retention of FDI caps in some sensitive sectors and Insurance sector is one of them. It may be recalled that while the reforms in various sectors of the economy were welcome, there was considerable debate on the need for reforms in Insurance industry. Fiduciary obligations between Insurers and the insured was a big issue but once the legislation was put through, the actual process of inducting private players into the market had gone off smoothly. Insurance sector is perhaps the only sector in this country where the transition from State monopoly to free market has been hassle free. To wind up the things, one can say that India has maintained a well balance between reforms and regulations and this is the gist of the present book.

The book provides readers with a comprehensive guide to the laws relating to Insurance sector along with commentary on the legal provisions. From socialist economy to capitalist economy, law has always played an important role. An attempt is made to analyze the Insurance reforms in context of law and the role of Regulstor (IRDA). Every possible care has been taken to incorporate the major legislative provisions in relation to Insurance market, focusing on Insurance Act 1938 , IRDA Act , Insurance Laws Amendment Act 2013 along with the key proposals touching Insurance sector by the B. N. Sri Krishna Commission on Financial reforms, the Indian Finance Code Bill. Finally the theme and the comprehensive content of the book make it equally useful for students from non-law streams like Commerce, Management and Economics also which cannot remain untouched by these financial reforms and the law which regulates it.