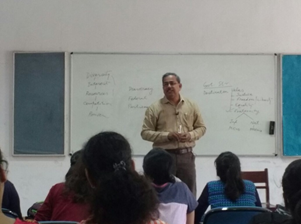 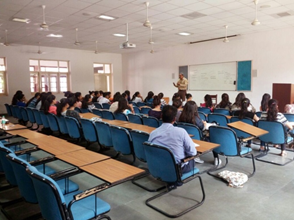 CASH organized a talk entitled ‘Indian Polity and Parliamentary System’ by the renowned political theorist Dr. Alok Srivastava, Government College, Ajmer on 12 September 2016 in room no 7. The talk was organized and arranged by the department of Political Science with Academic Student Society SANGLAP. Dr. Kumar Sambhav Pareek explained the importance of Indian politics in current scenario by emphasizing over the notion of Democracy in India. Dr. Srivastava traced back the political system from ancient philosophers and political theorists like Plato, Aristotle, Hobbes, Locke etc. and contextualized its importance in forming the present model of Indian political system. He explained the otherwise abstruse concepts like ‘Tolerance’, ‘Dissent’, ‘Conflict’, ‘Consensus’ and ‘Democracy’ by pulling out everyday examples for the benefit of the students. His talk was well received by the students and faculties alike and stirred a thought provoking discussion among the students. A very fruitful question answer session followed the talk. Dr. Pareek felicitated the speaker on behalf