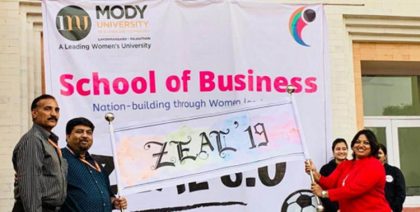 The opening ceremony of Zeal 3.0 – the annual sports meet of School of Business – was held with all fanfare from November 12 to 14, 2019. It was organized in the SOB grounds and it started with a wonderful introduction given by Dr. Anirban Sengupta, Dean, School of Business. Dr. V.K. Jain, Dean, School of Engineering & Technology, Ms. Pratima Pandey, AGM – Sports, and Prof. Kshitiz Jangir, Sports Coordinator, School of Business, were cordially invited on the stage to officially inaugurate the event. Finally, an enthralling dance performance was given by the students in order to make the environment livelier. Thereafter, the scheduled games took place.

The event commenced with the marathon on 12th of November. The competition was scheduled at the beginning to show a glimpse of the actual zeal and enthusiasm of the participants. The marathon was flagged off by Dr. Anirban Sengupta, Dean, School of Business, Dr. Satish C. Shastri, Dean, School of Law, and Ms. Pratima Pandey, AGM – Sports. The starting point of marathon was the SOB building and the participants were required to run on the decided track and then return back to the SOB ground itself. The winner of the same was Savita from SLAS department and the first runner up was Aarushi from SET. Both of them were rewarded with the medals and certificates at the time of closing ceremony.

Total 8 teams participated in Kho-Kho Qualifiers on 12th November and consisted of 9 members each. The competition was tough, and the ground was set with students cheering and sloganeering for the teams. Finally, results were announced and 2 teams out of 4 teams advanced, while the 2 teams were knocked out.

On second day of ZEAL 3.0, qualifiers round was held again for 4 teams which couldn’t compete due to time constraints on the first day. The matches were eye catching and there was a huge crowd of students cheering for their favorite teams and boosting their morale. Two semi finale matches were held that day, and the teams showed their sportsmanship and zeal to be in the finals. Unfortunately, due to heavy rainfall around 7 pm, further matches were postponed to 14th November. Team SLAS were the first finalists in Kho-Kho.

On 14th November, finals of Kho-Kho took place where both the teams played very enthusiastically. It was a close competition between the two, and finally, Team SOB won the match.

An exhilarating Chess Tournament awaited us within the SOB building at 6 pm. For the match, the pairings were drawn at random. In the qualifiers round, there were six matches. Each match had a time limit of 20 minutes, and the ones with more points were declared as semifinalists. The students used their cognitive capabilities to outwit, outsmart, and out strategize their opponent. The judge reminded them that their tactics should focus on strategic goals.

The semi-finale took place on 13th November with 6 students competing to be one of the 2 finalists. 20 seconds were allotted for each move and time management was the key. The atmosphere was quiet yet intense, and the pin-drop silence only heightened the anticipation. Finally, 2 players advanced to the finals, both students of SOB.

The finale round of chess tournament was scheduled on the last day of zeal at 3:00 p.m., in SOB building. As the match drew to a close it was Mansi Jain of BBA 3rd year who secured first position, followed by Saloni Rathi of MBA 2nd year who was declared the runner up. A well-built unpredictability was maintained throughout which added to the excitement and created an overall anticipative environment.

7 Stones is a game in India involving a ball and a pile of flat stones, generally played between two teams. It is a popular game in villages. This game helps to develop and hone aiming skills, strategy building skills, and teamwork in players. On 12th November i.e. first day of the fest, qualifiers round was conducted for 7 Stones, completing in an hour and a half. Total 17 teams participated and 5 teams qualified for semifinals and some teams played for the qualifiers round which were held on 13th November.

The 5 qualified teams participated and played enthusiastically. Each team was gave their best to qualify for finals. With the apt usage of their skills and strategies 2 teams advanced
to finals.

The finals were organized on 14th November and the competition was intense. The game was an eye-catching and attracted an encouraging crowd. Finally, the highly-anticipated results were announced in favor of the team from BBA 3rd year.

Day 1 of Zeal 3.0 witnessed an enthralling kabaddi match. The event was organized in the front lawns of SOB and it gained active participation from all the different schools across the
University. For the qualifier round four teams competed against each other. The teams enticed active cheers from the spectators with their vigorous performances. The teams gave each other a neck to neck competition and played with a sportive enthusiasm. 4 teams qualified for the semi-finale.

The semifinals held on the second day of Zeal 3.0 were a huge fan fair amongst the audience. All the teams proved their sportsmanship on the ground. Impressive efforts were made by all the teams, and 2 teams were declared finalists.

The Kabaddi finals were organized on 14th November, 2019. The two finalist teams competed against each other with all their dedication, power and energy. As players, each of them gave their best and this made the competition much more interesting and tough. Ultimately, the team from SOB were declared winners of the Kabaddi competition.

The Carom competition was held on 12th November 2019. 41 contestants took part in the competition. All the participants took careful moves while playing. Every participant in the tournament was equally strong. A platform was provided to participants and they utilized it to their fullest. The semifinals were held on 13th November. There was a tough competition
between the 10 semifinalists.

It’s was last day of zeal 3.0 and the finale of carom where the winner of carom was to be declared. It was an interesting game between two contestants from two different departments one from SOB and another one from SET. The match was interesting as the two of them were scoring same points and the last strike was deciding factor. But at last Rumanshi Jain student of B.Com I year from SOB department won the match. 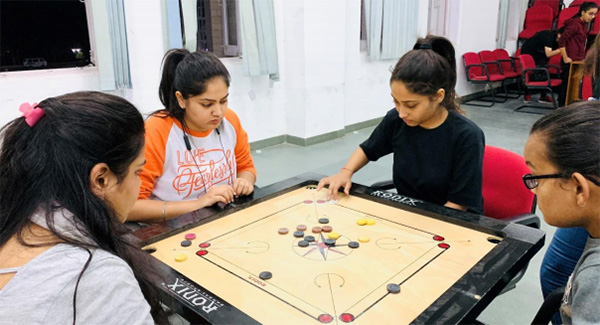 Open Mic was organized as a competition-free activity. It is a platform where anyone can come on the stage and perform any activity or talent such as comedy, singing, storytelling and many more. Registrations for ‘Open Mic’ were open for all the students of Mody University. Students actively participated and presented their talent. Some of them recited poetries and short essays related to friendship, love, affection, breakups, school and college life, and some amazed the crowd by their melodious voice. Those talented students made the evening much more beautiful with their performances. 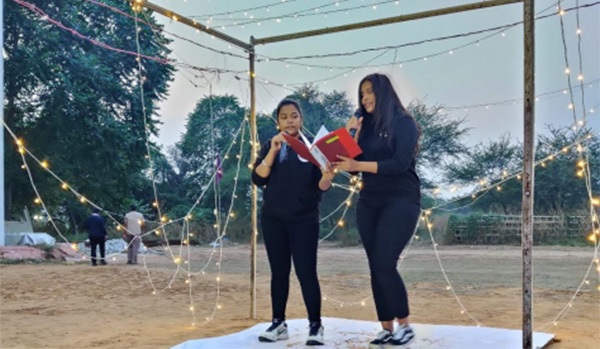 Day 2 of Zeal 3.0 paved the way for an amusing contest — sack race. A fun game in which all the participants were required to place their legs in a sack and hop(p)ingly make their way
to the finishing line. It was included in the category of “Other Games” and had an open registration which aroused an active participation of 70 players. The game was played in 3 rounds to funnel down the participants and an ultimate winner could be chosen. As the game started off it caused lots of giggles and cheers from the spectators as the participants hopped towards the end point. At the end of all the rounds the eventual winner was declared – Indu Sharma who leaped her way towards victory. Aptly it was a light hearted event that added entertainment and laughter to the fest. 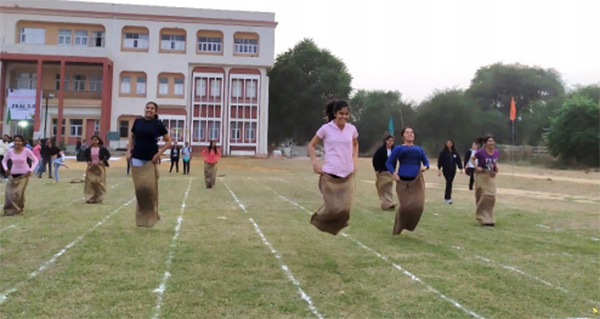 Antarakshari was organized on the 2nd day i.e. 13th November at the front lawns of SOB Building. The activity included 4 rounds and 7 teams consisting of 5 participating students each. In the first round, the teams were supposed to sing Hindi songs starting with the Hindi consonant on which the previous team’s song ended. All the participating teams qualified to enter the second round which was to identify the song based on the background music played. 6 teams qualified to enter the 3rd round which was to identify the song based on the video of the song displayed to the students. Meanwhile, due to rain, the activity was shifted indoors. At the end of the 3rd round, there was a tie in the scores of 3 teams for which the same round was repeated and 2 teams out of them were promoted to enter the 4th round in which 2 members from each group were supposed to act related to the actors and actress mentioned in the chits they picked while the other teammates would recognize through their act and suggest 5 songs having the respective actors and actress. All the participants were extremely energetic throughout the activity and the viewers enjoyed the enthusiasm of the participating teams. 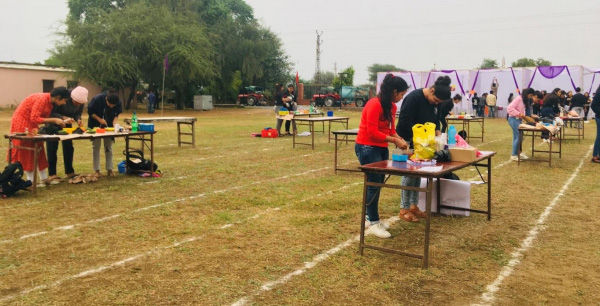 On 14th November, the school of SOB came across a splendid performance given by the teams participating in Fireless Cooking. The premise of the competition was to think of a dish which won’t require a stove, or any sort of fire to be prepared for the judges to taste. Participants had to bring their own ingredients for their dishes, then had to prepare the dish themselves, in a given frame of time. The competition comprised of six teams, wherein, all the teams prepared food which was mouthwatering. In spite of the great efforts made by all the teams, team six bagged up the first position. Participants involved were Gomti Yadav, Riya Jain, and Jaya Sharma.

Zeal 3.0 also gave a chance to the students to put their business acumen and management skills to use. The students who put up stalls got a firsthand feel of how to organize their businesses, how to win over potential customers, how to earn profits and how much to invest back in the business. Essentially, how to run a business. Even though the fest lasted 3 days, it gave the students a taste of how it’s going to be in an actual market, with a much wider audience and a much wider scope.