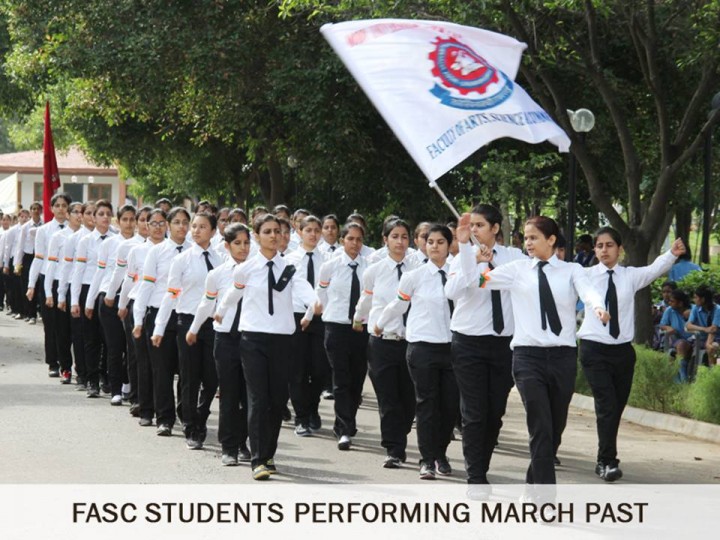 Vasudhaiva Kutumbakam (This whole world is ours)

He is mine and he is other, is the thought that narrow minded people have. For noble people, entire world is family

A message well emphasized by the students of Mody University of Science and Technology (MUST),  on the nationalistic occasion of Independence Day of our country. It’s quite obvious that this day is a moment of pride and glory for every nation and its citizens. Therefore to commemorate the sacrifices made by millions of known and unknown faces, the students of Mody Univesity, celebrated the 68Th Independence Day on 15th of August, 2014 as per a custom of its tradition. Every year, this day is marked as an important milestone among the number of events that are celebrated by the students of the university. The occasion was graced by the presence of Dr. Vimlesh Choudhary, Vice- Chancellor of Shekhawati University in Sikar. The performance staged by the Students of Faculty of Arts, Science and Commerce (FASC) dramatized the saga of human courage and the integrity that is epitomized by an Indian soldier figure. The act was accompanied by mellifluous music and enthralling performances by our students. The narrative portrayed the pain and sacrifice of an Indian soldier who was trapped in an enemy camp. Moreover, the performance was characterized by the patriotic fervour and a sense of responsibility among the common people of our country. It not only symbolized the bravery but also touched upon the emotional aspects of Indian army. The appealing tone of mourning of the soldiers brought the tear of joy and pride in the eyes of the spectators. The poetic dialogue delivery was the special attraction of the program. The Independence Day performance of the students of FET was centered on the main theme of the event. The primary focus was on the farmers of Indian villages, land and youth and the role they play to shape the destiny of India. The student tried to depict through their performance the importance of an Indian farmer as they are the backbone of our nation. An Indian farmer is busy night and day to produce food crops, oil seeds and commercial crops for our nation. The performance was absolute treat for the eyes. The FOL students have put up a beautiful group performance on various Rajasthani folk like Ghumar, Kanbelia and Manjira Nritya which really stunned the audiences. They got a big round of applause for giving an electrifying performance. FMS students’ performance was based on fighting social evils like unemployment, Corruption and Poverty which are still rampant in Modern India. As India Inc is marching ahead in 2014, we also witnessed a very turbulent time with regard to women’s safety, corruption, crime and social inequality. Keeping in mind our socio-cultural fabric, Mody Youngistan performed on various issues to eradicate illiteracy, poverty, corruption, gender inequality, unemployment and tension with the neighbouring countries. In the end, our students gave a message of unity in diversity, socio–cultural harmony, integration and honesty. The occasion saw many other events like flag hoisting and March past. The students from Mody School and Mody University executed several cultural performances that included stage dramas, patriotic songs, and enchanting folk dances. The performances enthralled everyone present at the occasion thus reminding the spectators about the rich culture and heritage that India holds as a country. The overall atmosphere was thus filled with patriotism, love and respect for our country. Indeed, this day turned out to be a reason why the Guests, Faculty and Students took the opportunity to take pride for the achievements of India Inc and at the same time pay homage to the soldiers and commandos who sacrificed their lives for our country.