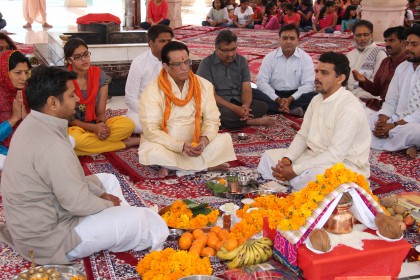 Meaning: Lord Hari is also called as Rama and he is beyond all cause. This whole world is a part of his Maya. Lord Ram is the only one, with whose essence everything shines as real (though in reality it is false) where snake is misapprehended as a rope and whose feet are a boat to those who aspire to cross the ocean of Samsara, the relative existence. I surrender myself to such great Lord.

Pronouncing the slokas, Mody University of Science and Technology started its celebration of Shri Rama-Navami Mahotsava on 8th February, 2014. On the holy day of Shri Rama-Navami we celebrate the advent of Lord Shri Rama, the 7th incarnation of lord Vishnu. Along with Sri Ram, people also worship Sita, Rama’s wife; Lakshmana, Rama’s brother; and Hanuman, an ardent devotee of Rama and the leader of his army in the battle against the asura Ravana. Sri Rama-Navami is dedicated to remembering Ram, as the most supreme with resolute Bhakti (devotion). It occurs on the ninth day, or navami, beginning count from the “no moon day” or Amavasya, during the waxing moon duration called “Shukla Paksha”. Rama has described people how to live life. He himself struggled and finally achieved success to show human beings that Sorrow and troubles are just passing cloud and they will finally diminish and good result will occur. Lord Rama was the best of men with a sterling character. He was the very image of love. He was an ideal son, an ideal brother, an ideal husband, an ideal friend and an ideal king. He can be taken to embody all the highest ideals of man. He led the ideal life of a householder to teach the tenets of righteousness to humanity. 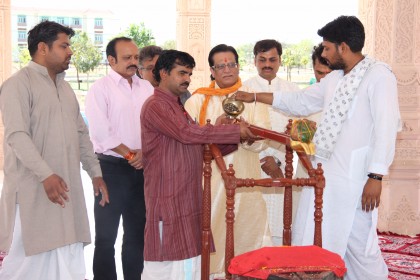 By devoting themselves to the eternal power, all students and staffs of Mody University gathered in the Tapovan to celebrate Rama-Navami. Eleven Vedic Scholars under guidance of Prof. Umesh Prasad Das, Jaipur performed Rama-Yajna in Yajnashala. The President of the University, Prof. Vishwanath Prasad was also present there and offered Homa and Pooja, as the representative of the institute. He warmly wished all the students and staffs of the University and expressed excitement after attending his first cultural event in the campus. Deans of the academic divisions, Principal, Mody School and other divisional heads with students’ leaders participated in the Yajna. Group recitations from the Ramacharitamanasa-Balakanda (selected part only) took place in the Rama-Mandira under direction of Pt. Akhilesh Tiwari, Priest of Tapovan. Special Raja-bhoga offered and special Arati performed between 1223-1245 Hr. 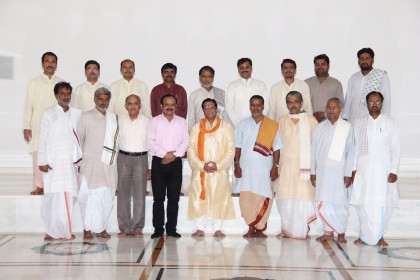 The University offers a platform that is a perfect blend of education, recreation and spirituality. Whether it is studies or sports or yoga or meditation or anything, it makes a good attempt to train students from all respect at the same time. It believes that, peace of mind is important to concentrate on the studies. Considering the fact, the University has included the very special Tapovan for its students, which consists 3 parts – The Temple, the Yagnashala and the Meditation hall. The temple is adorned with beautiful idols of Shri Ramchandraji, Mata Sita, Laxman and Hanumanji. This is why it has been named as the “The Ram Darbar” by the people in & around the campus. Along with this, the idol of Surya Dev with his 7 horses is also crafted at the Shikhar, (the large dome) of the temple. This very work of art indicates the motion-oriented life of the students.

The students celebrated Ram navami praying for good health and a successful future. Ram navami is a very important festival for Hindus but students from different cultural backgrounds take part in organizing it as well as in the celebration. This is quite a commendable subject about the culturally diverse student body of the University.